For those of you outcast (JK) who haven’t heard, Prince Harry (really Prince Henry), son of the famous Princess Diana, married actress Meghan Markle on 19th May 2018, last Saturday. They broke a lot of traditions in their journey of royal love, but hey, that’s love, amirite? Their wedding is blowing up the Internet.

Henry Charles Albert David, more commonly known as Prince Harry is the Duke of Sussex KCVO and a member of the British royal family (source: Wikipedia). His father was Charles, Prince of Wales, and his mother was (as everyone knows) Princess Diana of Wales.

If you have ever seen the TV show Suits (and you seriously should be ashamed if you haven’t 😦 ), then you’ll know that Rachel Zane was played by the now Duchess of Sussex, Meghan Markle.

FUN FACT: Meghan Markle’s real name is actually Rachel Meghan Markle, Meghan being her middle name. The character she plays in Suits’ name is also Rachel! Now I know two people who said the name ‘Rachel’ at the altar! 😉

Of course, all of us girls were looking to see Meghan’s wedding gown *fingers crossed it isn’t yuck, please, oh please* And guess what? It wasn’t!

Meghan Markle chose Claire Waight Keller, from Givenchy Couture, to design her wedding gown. It was sleek, minimalistic and no bling at all – and she looked gorgeous. The Harpers Bazaar says this about the highly awaited dress: The silk cady dress itself, an understated yet feminine floor-length gown, featured a bateau neckline and a triple silk organza under skirt. She also chose a cathedral-length, five-metre-long veil trimmed with lace depicting flora from each of the 53 Commonwealth countries.

Meanwhile, the groom, Prince Harry wore a tuxedo and looked positively happier than ever when his fiancée walked down the aisle with Harry’s father, Prince Charles of Wales. The couple’s faces light up with genuine love and joy when ever their eyes meet.

And, omigosh, let’s not dare to forget the absolutely stunning dress of Her Majesty, Queen Elizabeth II, the 92-year-old beauty who stole the show with her lime-green dress that looked a little something like this: 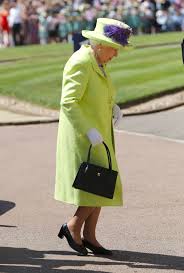 And that was the royal news of the year. Prince Harry getting wed to the (Duchess) Meghan. Now, here’s a little extra about the Harry-Meghan things by my wonderful blogger/friend Shay!

Let peeps know what I've done and I'll hug you

3 thoughts on “a royal wedding:the dawn of the harry-meghan era”

This site uses Akismet to reduce spam. Learn how your comment data is processed.

hi homie! thank u so much for visiting my corner of the internet; it means so much. while you’re here, check out my posts, read about me and/or check out what i’ve been up to using my social media handles below.

Join 473 other followers
Follow a little bit of allyson on WordPress.com

do not steal anything from this blog. if something caught your eye, please ask for permission from me using my contact form.

the watercolor graphics and background are from fox + hazel, the font is hensa, and images are made by me using canva.